9,879 O'LOUGHLIN members around the world 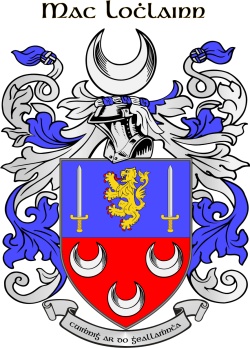 Design your own O'LOUGHLIN Family Crest

Loughlin (and the surnames variations) is an Anglicised form of the Gaelic ? Lachtn?in ("descendant of Lachtn?n"). The Gaelic personal name Lachtn?n is derived from lachtna ("gray").

Jack O'Loughlin From Australia. Aboriginal as well not sure of DOB but is great great grandfather

My O’Loughlin family lived in the Port Elizabeth/Uitenhage area of South Africa’s Eastern Cape province. Siblings were Joseph, Thomas, John, May (Mary?), Margaret. Joseph, the eldest (b.1897 d.1969) married my father’s sister, Norah Mullin (b.1898 d.1958), in 1935. The O’Loughlin siblings’ parents, John and Margaret (nee Canavan, also settled from Ireland - Waterford) died in Uitenhage late 1930s; believe his parents (siblings’ paternal g.parents) settled in South Africa from County Clare, Ireland (date not known). Last of the siblings named above died in 1970s. Would be grateful to learn any particulars that may be known (names, family relationships, date(s), name of vessel, ports of departure and arrival, etc) of that O’Loughlin family’s S.African settlement and of it’s more immediate (pre-settlement) Irish history. Also anything known on the Margaret Canavan family’s settlement and immediate pre-settlement Irish history. There is evidence that she may have had a brother, or close relative, George. Thank you.

I am from Australia my Grandmother was a descendant from the O'loughlins from County Clare. John O'loughlin

Areas of Origin for O'LOUGHLIN

Write an email address and click 'Invite' to share this page with more members of the O'LOUGHLIN tribe.

Discover where the O'LOUGHLIN Family members live around the world

Show off the O'LOUGHLIN Family Crest…